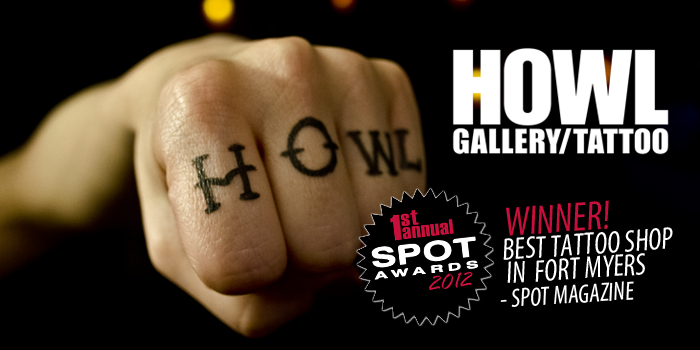 HOWL officially opened in March of 2009 in downtown Fort Myers after 6 months of construction.  Co-owner Andy Howl was the original co-founder of Fort Myers Art Walk and founder of the Fort Myers Music Walk events that helped re-invograte the historic district's art scene.   In May of 2013 we moved to a larger space across from the Edison Mall on Cleveland Ave. (US41 - Tamiami Trail) next door to Brents Music in the old Miracle Plaza.  The new shop features a large parking lot and double the space as the original downtown location.

Tattoo & Piercings Ft Myers
We specialize in custom tattoo work and currently feature tattooers Andy Howl, Kris Tirtel, Jay Gardner, Colion Orion, and Sparrow.  Our Piercer Jazz is a 2nd generation piercer amd considered one of the friendliest and most professional piercers in the area.   We consider ourselves an illustrative and traditional shop but work in all styles. To request interviews or speak with an artist about a tattoo or other artwork, please call the shop or just stop by.

A few of our awards, achievements, and accolades: